Since 2008 Charter Santa Pazienza offers excursions along the coast of Sperlonga and boat rental.

The routes pass through the breathtaking coast between the protected area of the regional Park 'Riviera di Ulisse', the Emperor Tiberius holiday villa and its relics and the ancient Via Flacca ( B.C.184) created along the Monti Aurunci's overhangings sloping to the crystal clear sea. You'll see the sighting medioeval towers and the many grottos which open to the beautiful coast, among those the most famous is 'Grotta Azzurra'. You'll be breathless thanks to all this beauty... 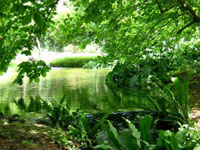 The town of Ninfa takes its name from a little temple dedicated to the nymphs during the Roman period, built on one of the most abundant springs at the foot of the Lepini Hills. These waters gave life to the original river Nymphaeus. Of the abandoned medieval town there remain today an imposing double wall and the ruins of a castle, churches, municipal buildings and many private dwellings. As in the past, water is still the key to Ninfa's survival.

Ninfa draws together history, architecture and nature. The microclimate and eco-system are rare because Ninfa sits at the juncture of two contrasting geological formations - the alluvial Pontine plain and the limestone Lepini hills. The property faces south and enjoys the benefit of pure and abundant spring waters.

Though in ruins, Ninfa is a rare example of a complete medieval town. Abandoned for five centuries, it was described by the historian Gregorovius in the 1880s as the Pompeii of the Middle Agesi'. What we see today are the significant remains of a fortified town, encircled by a double girdle of walls, which reached its peak of prosperity between the 13th and 14th centuries. The urban layout is still clearly distinguishable, giving the garden a setting that appeals to the imagination. The main buildings, not all of them in good condition, are easily identified as the castle, the town hall (converted to a Caetani family house), and the churches of S. Giovanni, S. Biagio, S. Salvatore, and S. Paolo all situated along the outer walls. S. Maria Maggiore occupies a central position and S. Pietrooutside the wallsi' stands closer to the base of the hills.

Over time the Garden of Ninfa has developed a truly international plant collection. It is widely known for being both a protected monument and a nature conservation area.

40 km from the beaches of Formia and Minturno, slightly beyond the border between Latina and Frosinone provinces, we find Pastena, a castle of volscian origin, rebirth in 1227 under the rule of the Del Drago family. This place is famous for some carsian caves of national interest.

A visit to the caves will give the tourist both the chance of satisfying a naturalistic curiosity and the possibility of a spiritual experience. It is almost impossiblenot to perceive a recall to the Palaeolithic era, when it was a place of primary shelter against dangerous natural phenomena.

The descent to the caves allows visitors to get in touch with a natural environment million of years old, where human intervention was limited to the creation of a safe path in the rock. The characteristics of the huge cave were determined by the erosive action of a stream of water.

The Cave is divided into two stumps: a fossil one, 900 metres long, allows a detailed tour of the cave and presents wide cavities (weeping-willow hall, tile hall, wonder hall, column hall and torment hall) and the main attractions; an active one, accessible trough a 200 metres staircase, which after 2000 metres, will lead to the Sacco valley and Falvaterra. Such a natural beauty was discovered in the beginning of 1900 thanks to Carlo Franchetti, a roman baron, who, helped by the Capital speleological group, allowed a greater accessibility and a livelier naturalistic interest.

This interest persuaded the Lazio regional government to supply the Consorzio per la Conservazione e Valorizzazione del Patrimonio Speleologico delle Grotte di Pastena e Collepardo, the funds necessary to have the site accessible to tourists, thus allowing the instalment of an internal lighting system and a suitable paving allowing a safe walk, despite the persistent humidity (98 to 100%).

The local staff is very professional and will guide the tourist to the discovery of this wonderful and romantic corner of our land.

The long opening hours (8:30-19:00: summertime, 10-16: wintertime) and the tour guides facilitates the presence of many tourists for the one-hourlong visit. We hope that in the future the ring for the whole cave will be completed, thus making it Italyi's most important carsian natural site. We also hope that a gorge will be constructed, in order to monitor the afflux of Fosso Mastro all year round.

It must be remembered that the entrance fee to the Cave gives also access to the live and peasant civilization museum, located in the well restored communal palace of Pastena.